By clicking “Accept”, you agree to the storing of cookies on your device to enhance site navigation, analyze site usage, and assist in our marketing efforts. View our Privacy Policy for more information.
PreferencesDenyAccept

What is Lynch Syndrome?

During organ and tissue growth, or healing of organ and tissue damage, your cells divide to make more cells. As each cell splits, the DNA divides and makes a copy of itself for the new cells. This is called DNA replication. Mistakes that occur in the copying process are called DNA mismatch. In patients with Lynch Syndrome, the ability to repair these common mistakes is impaired or deficient.

How is Lynch Syndrome tested?

When testing for Lynch Syndrome, your medical team is looking specifically at your genes, not your tumor’s genes. Initial laboratory testing on tumor (tumour) tissue, called immunohistochemistry (IHC), may be performed to screen for abnormalities in the mismatch repair (MMR) proteins. IHC is a method of testing proteins in a tissue biopsy by adding an antibody probe created in the laboratory that will attach to the proteins (antigens) of interest, in this case mismatch repair proteins. The antibody probe is also bound to a chemical compound that makes it visible under a microscope. This can be used to measure the amount of MMR proteins by looking at the amount of the visible antibody probe bound to it.

Genetic testing for Lynch-causing mutations in the MMR genes is performed on a blood sample or on cells collected from your mouth or saliva. Testing for Lynch Syndrome is often accompanied by consultation with a genetic counselor, a healthcare provider with cancer genetics training. Genetic counselors provide risk assessment, education, and support for patients and families that may be affected by a genetic syndrome.

What do my Lynch Syndrome testing results mean?

If you do not have Lynch Syndrome, your results will be reported as “negative” or “no pathogenic mutation detected”.

If you have Lynch Syndrome, your report will say “positive”, “pathogenic mutation detected”, or “variant detected, likely pathogenic” and will name the gene in which the mutation was found, like MLH1 or MSH2.

How do my Lynch Syndrome results impact my colorectal cancer treatment?

How does Lynch Syndrome affect my risk of other cancers?

If you have Lynch Syndrome, you have a higher risk of several different types of cancer including colorectal cancer, endometrial cancer (uterine), stomach cancer (gastric), ovarian cancer, pancreatic cancer, and prostate cancer. Lynch Syndrome is also associated, though less frequently, with cancer of the small intestine (small bowel), biliary tract cancer (gallbladder and bile ducts), urinary tract cancer (kidneys, ureters, and bladder), and some skin cancers. The level of risk depends on which mutation you have. For example, MLH1 and MSH2 mutations lead to a lifetime cancer risk of 70-80%, while MSH6 and PMS2 mutations are associated with a 25-60% lifetime risk of cancer.

How does Lynch Syndrome affect my family members?

Because Lynch Syndrome is inherited, it is critical that your biological family members know about your diagnosis of Lynch Syndrome and have their own genetic testing. Family members who are diagnosed with Lynch Syndrome will start cancer screenings (such as colonoscopy) at a younger age than the general population and may be tested more frequently. If you have consulted with a genetic counselor in your Lynch Syndrome testing process, they can help you with information for your family members.

Who should be tested for Lynch Syndrome?

Colorectal cancer patients diagnosed at less than 50 years old should undergo genetic counseling and evaluation for Lynch and other hereditary colorectal cancer syndromes. 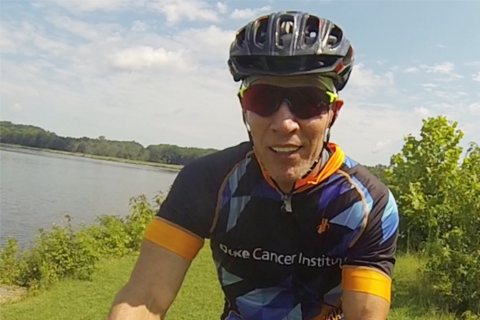 Biomarker Testing Gave Me the Chance I Was Looking For

A change in DNA that is present in reproductive cells (sperm and eggs). These mutations can be passed on to children. Inherited mutations are then present in all body cells of the offspring.

A change in DNA that is present in reproductive cells (sperm and eggs). These mutations can be passed on to children. Inherited mutations are then present in all body cells of the offspring.
Hereditary

Learn about how right-sided colon cancer and left-sided colorectal cancer are different and how that affects your prognosis and treatment.
+  Read more

What is a biomarker?

A biomarker is a piece of information about your health. Biomarkers include your blood pressure, your blood type, and cholesterol or blood sugar levels measured in a blood test. The biomarkers of cancer are also known as tumor markers.