By clicking “Accept”, you agree to the storing of cookies on your device to enhance site navigation, analyze site usage, and assist in our marketing efforts. View our Privacy Policy for more information.
PreferencesDenyAccept

What is the KRAS biomarker?

KRAS is a member of the RAS family of genes, along with NRAS and HRAS. These genes play an important role in the way that cell growth and cell survival are controlled. Mutations in these genes can cause cells to grow abnormally, and become cancer. Genes, like KRAS, that can cause normal cells to become tumor (tumour) cells are called oncogenes. The KRAS gene mutations found in colorectal (bowel) cancer are not hereditary. (The term KRAS is short for Kirsten rat sarcoma virus. The KRAS gene was first discovered in a sarcoma-causing virus in rodents, but the KRAS discussed here is the human version (homolog) of that gene which is not related to rodents or viruses.)

KRAS is both a prognostic and predictive biomarker. It gives information about the usual course of disease (prognosis) and it predicts which treatments may be more or less effective against a particular colorectal cancer, such as conventional chemotherapy drugs or targeted therapy with EGFR inhibitors. The KRAS gene is a factor in many cancers. The prevalence of KRAS mutations is 40% in colorectal cancer, 20-40% in non-small cell lung cancer (NSCLC), and more than 90% in pancreatic ductal cancer.

How is the KRAS biomarker tested?

The recommended method of testing KRAS is with a tumor biopsy sample, either from the primary colorectal adenocarcinoma tumor or from a metastatic tumor. KRAS may also be tested in a blood sample by examining circulating tumor DNA (ctDNA) for KRAS mutations. This is called a liquid biopsy. It may be tested individually, or as part of a multi-gene panel using next-generation sequencing (NGS).

What do my KRAS biomarker test results mean?

If your KRAS biomarker result is reported as “KRAS wild-type” or “KRAS WT” this means there is no KRAS mutation in your cancer.

If there is a KRAS mutation in your cancer, it will be reported as “KRAS mutant” or its specific mutation will be listed, for example “KRAS G12C” or “KRAS G12V”.

How do my KRAS testing results impact my treatment?

If your KRAS is wild-type (no mutation)

If your KRAS has a mutation

What is the role of KRAS in acquired resistance to EGFR inhibitor treatment?

Who should have biomarker testing for KRAS?

If you have stage IV / metastatic colorectal cancer, you should be tested for the KRAS biomarker.

If your healthcare team is considering EGFR inhibitor treatment, you should be tested for KRAS mutations. In addition, if you have developed EGFR inhibitor acquired resistance and take a break from those drugs, your oncologist may order repeat KRAS testing to see if your tumor continues to be resistant. 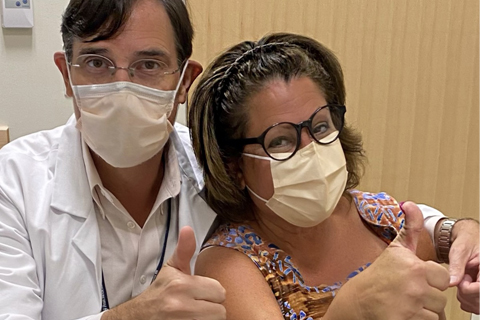 A gene that can cause normal cells to become cancer cells.

A gene that can cause normal cells to become cancer cells.
Predictive biomarker

A biomarker that gives information about what treatments may be more or less successful.

A biomarker that gives information about what treatments may be more or less successful.
Targeted therapy

Describes a gene that has the normal sequence. The gene has no mutation.

Describes a gene that has the normal sequence. The gene has no mutation.

Learn about the NRAS biomarker and how it affects your colorectal cancer targeted therapy options.
+  Read more

Learn about the BRAF biomarker and how it affects your colorectal cancer targeted therapy options.
+  Read more

Learn about HER2 amplification / over expression and what it means for your colorectal cancer treatment.
+  Read more

What is a biomarker?

A biomarker is a piece of information about your health. Biomarkers include your blood pressure, your blood type, and cholesterol or blood sugar levels measured in a blood test. The biomarkers of cancer are also known as tumor markers.